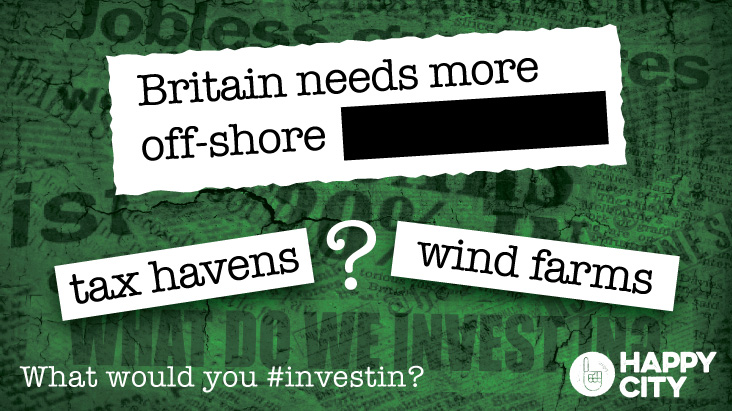 The Santander Changemaker Fund match-funded Happy City’s #InvestInHappy crowdfunding campaign with an additional £10,000 of funding, bringing the total to £21,156.

The success of Happy City’s crowdfunding campaign allowed us to achieve the following:

What was the #InvestIn campaign all about?

Our #InvestIn campaign called for the economy to be reprogrammed so that it works for everyone.

March 2018 marked fifty years since Robert Kennedy made a speech spelling out the inadequacy of GDP, famously saying it measures ‘everything but that which makes life worthwhile’. We didn’t think it was good enough that fifty years later we were still waiting for change.

We know our economy isn’t working. It’s hoovering wealth upwards and creating runaway inequality, work doesn’t pay enough to live on, casino capitalism could plunge us into the next crisis any day, and in the pursuit of GDP growth we are putting the planet we live on at risk.

In order to meet the needs of people and planet, we need to tackle inequality, and we need to think outside the box on economic alternatives. We wanted to use #InvestIn as an opportunity to highlight that leaders and decision makers must do better, and begin investing in what creates real wealth in our society. #InvestIn challenged them to do so as well as celebrating how ordinary people and communities can build a better economy from the ground up.

In November 2017, around the UK budget, together we sparked a debate about what we should #InvestIn. Read more in our blog about how communities responded to the campaign, or our article for Huffington Post.

As the government reviewed economic progress in Spring, we produced our own Happy City Spring Statement setting out our priorities for a wellbeing economy where everyone can thrive.

On International Day of Happiness 2017 we launched a photo competition asking what makes you #HappyBeyondGDP?  You gave some inspiring answers. Check out all the images and photos here.