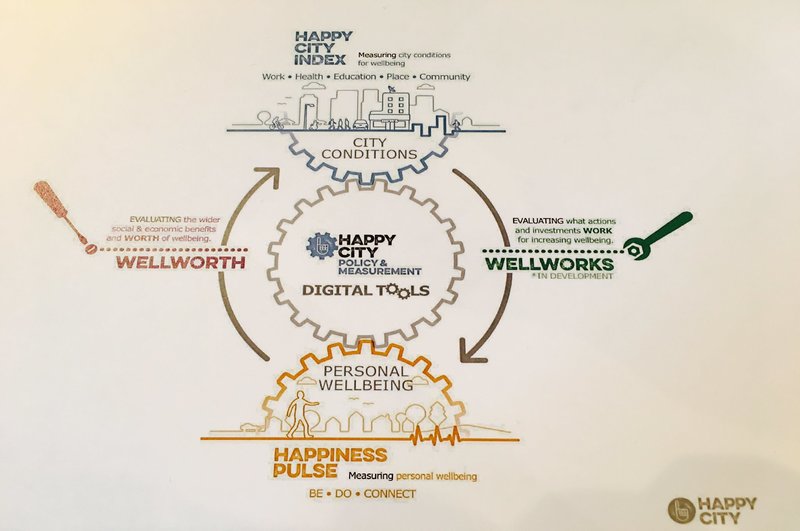 Did you know that 81% of Britons think the government should prioritise creating the greatest happiness not the greatest wealth?

But how many headlines do you read about Happiness inflation or recession? Up to now that has been partly about a lack of political courage, credible measures of wellbeing and any detailed research into the drivers of happier communities.

Well things have moved on internationally (we all know about the Scandinavians dominating the Happiest Country rankings), and at a national scale, with the Office for National Statistics are now measuring more of what matters to people’s lives. But at a local scale, where most of us experience happiness (or misery) very little has moved on. Until now. This week the UK Charity ‘Happy City’ releases the first results of it’s Happy City Index.

This is crucially not another ‘list of the Happiest Places to live’. This is a measure of how well cities in England are creating the right conditions for people to thrive. Importantly it also shows whether they are creating those conditions in a way that is fair and equitable – spreading the benefits to all citizens, and whether they are doing so in a way that doesn’t jeopardize the wellbeing of future generations.

The Happy City Index is a radical new way for cities to understand and measure ‘progress’.

Unlike the headline grabbing GDP, which merely measures how profit a city has made and how much stuff it’s citizens have consumed, The Happy City Index assess the success of a city on a wide range of indicators, from economy, education, health and culture, to carbon emissions and income inequalities and housing.

There is a wealth of information for each city to explore – to help focus strategy on what really matters to people’s lives, and start investing resources into the areas of city life most in need of improvements.

So how have England’s largest cities fared on this new scale of progress?

Well Bristol is ahead in delivering the best conditions for their citizens across the board, but has a lot to do to improve how equitably it is providing those conditions. There are also notable areas for improvement including in Mental Health and Housing.

Nottingham, in contrast, scores poorly on a range of areas of City conditions, including Social Isolation, Safety and level of local business, but comes second in the overall rankings for both Equality and Sustainability. So whilst there are many areas for growth in Nottingham’s prosperity, it is developing in a fairer and greener way than most other English Cities.

Who’s behind this new index? Happy City UK has been working with key partners such as New Economics Foundation and a wide range of Academic, Public and Voluntary Sector advisors for the past five years to create Happy City Index. Our aim is to support Local Authorities across the UK to put the measurement of wellbeing, and the conditions that support it, at the heart of decision making.

The Happy City Index 2016 was launched in Bristol on Tuesday 8th November, alongside two other new tools. The Happiness Pulse is a live measure of wellbeing for communities and businesses and WellWorth translates improvements in wellbeing into the impact on health, education, crime, the economy and more. Together these can drive better policy and decision making at every level of city life.

Interest in our work is flooding in from around the UK and way beyond, so watch out for the 2020 headlines as city leaders vie for recognition as the the greatest providers the most opportunities for us all to thrive.