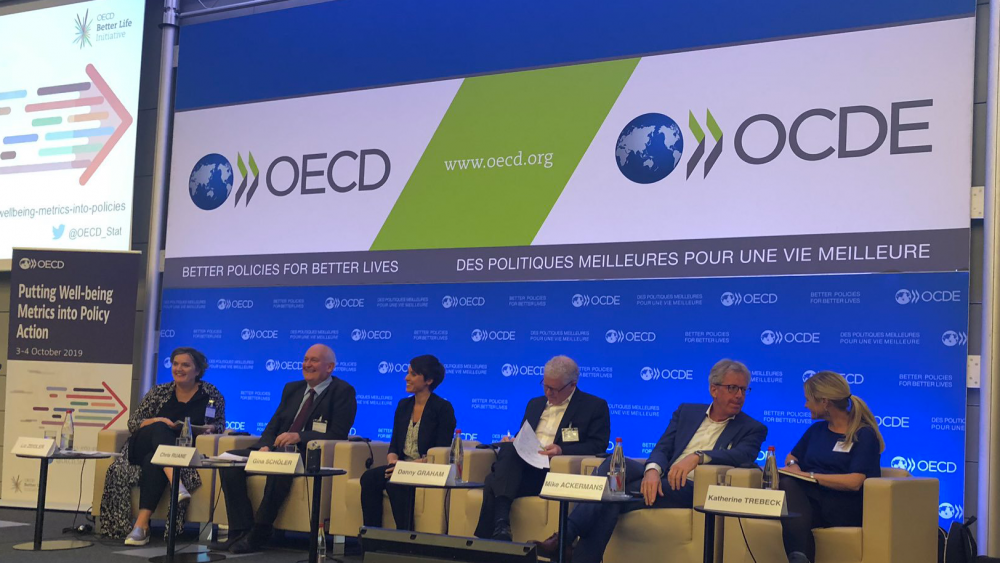 Last week decision makers from around the world gathered at the OECD headquarters in Paris to discuss “Putting Wellbeing Metrics into Policy Action”.  It was the third time Centre for Thriving Places has spoken at the OECD. The earlier occasions in 2013-14 were in the early days of our work to redefine progress via the global Better Life Index, and of our local to global approach with the Thriving Places Index.

In the conference hall last week it was clear that the impact trajectory of this work is rising sharply. Speaker after speaker stood up to say it’s now time to move from talking and developing metrics to getting on and delivering this new economy.

If I reflect on the last 10 years of our collective work in this space it has gone through different stages. From persuading people that fundamental change was necessary and that wellbeing could and should be the ultimate purpose of governments, businesses and all of society. To years spent proving this was possible and practical – developing the tools, the training, the support services to deliver a wellbeing economy – in our case at a local level and a national scale, and for the OECD at a national level and global scale.

To now. When all that work is starting to show results and as younger generations are rightly pointing out, time is of the essence. Now is the time for action, for rapid transition to a sustainable, equitable economy that delivers growth in the quality of our lives, not merely the quantity of our wealth.

Many of the people and messages at both conferences were similar but the difference in tone and impact were clear. I once felt like the radical outsider challenging the core message that ‘growth’ was essential and just needed to be tempered or improved with words like ‘inclusive, green, smart or sustainable’ tagged on to it. Now everyone from Jeffrey Sachs, one of the world’s most influential economists, to Ange Gurrial, the Secretary General of the OECD, were queuing up to to champion the urgency of shifting the dial away from growth for growth’s sake and towards delivering for people and planet.

Heads of treasuries rather than public health officials were there presenting wellbeing metrics on behalf of governments. New Zealand’s success is being measured via wellbeing at every stage – from planning and budgeting through to delivery. For UAE wellbeing is fast becoming the ultimate outcome measure for all of government. In Scotland and Wales wellbeing is increasingly not a sector but the focus and responsibility of health, business, environment, education and so on, all coming together to tackle big knotty and previously entrenched problems. Growth was talked of in terms of the growth of quality of life, of renewable energy, of zero emission homes and equality of opportunity.  Now that’s growth I can sign up for.

Change was in the air and its influence was clear.  As one speaker put it – the court of public opinion is shifting and politicians everywhere have to look at their duty to the next generation, not the next election.

Sir Gus O’Donnell, the ex-head of the UK Civil Service and Treasury and long-time champion of wellbeing economics reflected on the ‘hidden heroes’ of the climate change movement. Not the ones gaining today’s headlines, but those who started measuring the changes in the climate and the contributory factors to it, decades before anyone thought it was relevant and whose work made today’s action possible.

In Paris last week were gathered many of the hidden heroes of the future economy – those, including Happy City, who have battled to have new measures of progress taken seriously, toiled to develop tools to measure what matters to people and planet, and are now helping put a wellbeing economy into practice in towns, cities and nations around the world.

Progress may have been slow coming, but it seems the world is starting to wake up.