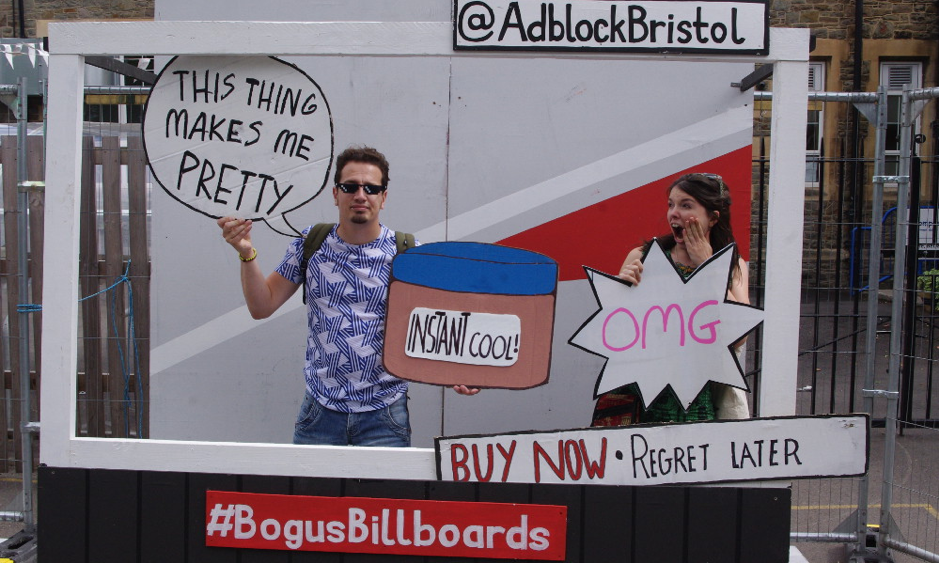 Continuing our series of guest blogs highlighting themes of the Economic of Happiness conference this weekend, Nicola Round from Adblock Bristol looks at why people in the city are rising up against corporate outdoor advertising and how together we can create positive challenges and alternatives – for an economy which values people and wellbeing, not corporate power and consumerism. Adblock Bristol will be running a workshop at the conference on Saturday 20 October.

Earlier this year Bristol City Council consulted on proposals to introduce advertising into the city’s parks and green spaces. The idea was met with deep concern from the people of Bristol. It led to many objections, a 4,000+ strong petition, a full council debate at City Hall and a resulting promise from the council to shelve plans for introducing any large scale advertising into parks – at least for now.

Why were people so horrified with this idea? Because parks are for leisure, relaxation and wellbeing, for escaping the pressures of modern life – including the corporate advertising messages we are constantly bombarded with every day which are designed to make us feel inadequate, ugly, old, unsuccessful or otherwise failing in some way unless we buy more products, from fast cars to celebrity-endorsed perfume. The corporate advertising industry thrives on our dissatisfaction and insecurities, knowing that a happy person is simply not a good consumer. People badly want a break from this. We want to be able to escape, so we don’t want to experience these pressures when we’re in the park. But it’s not just parks where people want to be free from advertising. Corporate outdoor advertising is all over our cities in the form of billboards and digital advertising screens, and we have no choice about whether we see it or not. What’s more, research from the University of Bath shows that we may also have no choice about whether we’re influenced by it, as advertisers use sophisticated techniques to influence us on a subconscious level.

A growing number of people are fed up with seeing unavoidable, manipulative adverts everywhere they turn. Deeply unpopular sites include the enormous 12 metre screens on St Philip’s Causeway, where current proposals to build a second identical structure directly opposite the existing one have been met with disbelief from residents, with over 50 objections so far submitted.

This follows closely behind proposals earlier this year for huge digital advertising screens in the centre of the city, which were rejected by councillors following a large number of public objections. Advertising company JC Decaux are currently appealing this democratic local decision, putting the final say about our city’s public spaces in the hands of our leaders in London. Digital screens have also been rejected this year on Stapleton Road in Easton, and on the City Point building opposite Temple Meads station, a decision which is also currently being appealed by the advertisers.

The battle for public space has been recently highlighted again through a heroic fight by Westminster’s local council to stop a barrage of applications for new so-called wifi units. In reality these are a way for Google and partners to introduce yet more advertising, data capture and surveillance technology into our public spaces. Well done again to Bristol for rejecting plans for a swathe of such units proposed for our city earlier this year.

These cases show clearly that Bristol is, and will continue to be, an example to other cities in standing up against the continuing onslaught from the advertising companies who have shown that they have no interest in what is best for Bristol, its people and environment.

Which brings us to the more interesting question of what we dowant for our communities and public spaces, if not billboards. Should we follow the example of Grenoble in France who replaced billboards with trees and community noticeboards? Is Bristol more likely to opt for more public art in place of billboards, given the city’s strong street art culture? Or perhaps we would simply be happy to just remove them, revealing in some cases beautiful architecture such as where communities have successfully campaigned to remove billboards in front of a church in St Werburghs or on buildings in the Christmas Steps Arts Quarter.

As seen in the opposition to advertising in parks, many people feel that public spaces are not for corporate advertising. An alternative to this is the opportunity for people to co-create something positive for our communities; to shift from being passive consumers of advertising messages to participating and having a say in what we see in our public spaces.

We’ve had fun getting creative with Bristol communities to explore people’s ideas about the problems and solutions. In Southville people of all ages have seized the opportunity to express themselves during temporary cover-ups of a corporate advertising space, and through the chance to share their thoughts about their local community at a recent street fair. At the recent annual Upfest street art festival in south Bristol hundreds of people got involved in taking a light-hearted look at advertising messages by creating their own spoof billboard adverts as part of our #BogusBillboards activity (see main image).

In St Werburghs we’ve been working with communities and artists to co-create a series of artworks for a disused billboard space. The first design was co-created between artist Matt Bonner and local residents showing what people value about their neighbourhood, and celebrated the long-running campaign to remove billboards. Other installations include a piece by artist Bill Posters incorporating the results of a local survey about what really matters to people about their local community, and the currently installed artwork by Aide Wilde using quotes gathered at a workshop on the theme of ‘My mother’s aspirations for me…’. The collaborative experiences and outcomes of these projects are a world away from the powerlessness and manipulation people feel in the face of corporate advertising, and show how public space can be used instead for something which celebrates and benefits communities.

These initiatives build on a strong history of art as a powerful force for social change as seen in the situationist and subvertising movements, and the examples of places like Stokes Croft in Bristol where the streets are a rolling public art gallery of inspiring messages and campaigns, which we’ll also be exploring at our workshop on Saturday. We’re looking forward to hearing more ideas from communities for how we can reclaim our public spaces to work for people, not profit, and continue to collectively build the movement for happier, healthier Bristol free from the pressure of corporate outdoor advertising.

The 18thInternational Economics of Happiness conference: Exploring Global Change Through Local Action is organised by Happy City and Local Futures and runs from 19-21 October. Find out more about Adblock Bristol at www.adblockbristol.org.uk or follow the campaign on Twitter.